Frederick George Shaw married Edith Florence Gray, daughter of Frank Gurney Gray and Elizabeth Lavinia Kingsley, on 2 August 1913 at the Parish Church of Holy Saviour, Hitchin, Hertfordshire.1,2,6 Frederick George Shaw lived at Ickleford at the time.7 He was granted Letters of Administration for the estate on 4 January 1915. The estate amounted to £47 4s 10p.8

Frederick George Shaw lived at 64 Glebe Road, Letchworth, Hertfordshire, on 31 October 1921.9 He insured the contents for £150 on 31 October 1921 with the Fine Art and General Insurance Company of 66 Threadneedle Street at EC2.9

Frederick George Shaw died on 6 October 1948 at age 62 at 123 Norton Way, Letchworth, aged 62 years from cerebral haemorrhage and arterio sclerosis.1,10 and was buried in Letchworth Cemetery. The funeral arrangements were undertaken by A Favell & Son of Letchworth. They provided a best waxed elm coffin with best fittings and interior, motor hearse, bearers and two morning cars at a cost to his widow of £25 12s 6p.2,11

Frederick George Shaw was the owner of a bible which passed to his daughter Joan.13,14

Frederick George Shaw was a Mechanical Engineer on 8 October 1948.10

Female, #308, b. 16 May 1887, d. 26 March 1959
Pedigree
Edith Florence Gray, daughter of Frank Gurney Gray and Elizabeth Lavinia Kingsley, was born on 16 May 1887 at Pirton, Hertfordshire. Family lore has it that she was born in Northaw but her mother's bible records that she was born in Pirton. This seems the most likely place as her birth was registered at Hitchin which covered Pirton but Northaw was covered by Hertford.1,5,6,7,4,8,9,10 It is not known where she was baptised butshe was confirmed at St Saviour's on 2 May 1902.4 She was put into service with the Goodhalls who kept a big housein Chobham. They were very good to her and the three children gave her a silver tea-set when she got married.11 Edith Florence Gray is known to have been a Children's Nurse during her life so it is assumed she was employed as such by the Goodhalls.1 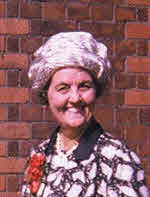 Joan Varley (nee Shaw)
c. 1966
Pedigree
Joan Katharine Shaw, daughter of Frederick George Shaw and Edith Florence Gray, was born on 15 June 1917 in Glebe Road, Letchworth.1,3 When she was eight years old, her mother used to send her to see her Granny in Hitchin a lot. On these occassions Joan was given a bucket of water and a scrubbing brush to clean the four concrete steps at the back of the house.4

On 24 November 1948 Joan Katharine Varley and Edith Florence Shaw were jointly granted Letters of Administration for her father's estate, which amounted to £1871 5s 1d.7,8

Joan Katharine Varley was a Supervisor.1

She possessed a number of family heirlooms one of which was a small metal box made by her father. She kept her family papers in it and stored it in the suitcase given to her by her husband.9 She also had a copper warming pan which came to her when her Granny Gray died.10 Two more items which she had were the suitcase which her husband gave her as a 21st birthday present11 and small bible inscribed "Joan Shaw Dec 25th 1930" It includes a short note; 13 Florence St. Just to write you many happy returns of your 21st birthday. Will you please buy yourself some little thing with the enclosed. Wishing you the best. Grannie.12

Leslie was first a carpenter8 and then a soldier when he joined the Royal Army Supply Corps eventually being promoted to on 25 November 19397 Regimental Sergeant Major.8 Heleft the Army in 1962 and worked at the Tower of London9 where he was the Chief Yeoman Warder until 1980.8,9

Leslie was the Parish Clerk at the The Chapel Royal St Peter ad Vincula, Tower of London, from circa 1978 to circa 1992.9

Barbara Seabright-Moore of Canada said of him in 2016:

I knew Leslie Varley very well in the 1970’s and 80’s. He was a very good friend of my Uncle Brian Seabright and was the Godfather of my twin cousins Dianne and Debbie Seabright who were baptised, by Leslie’s petition to the Queen, at the chapel in the Tower of London. I stayed at Leslie and his wife’s house in the Tower in 1976 when I was 15 and was visiting my relatives there. I always knew him as such a charming and lovely man with such a lovely sense of humour. He took us on private tours of the Crown Jewels and invited us to the Ceremony of the Keys for a private encounter which always stood in my memory. I have never been able to find anything about him and discovered your page with his picture which I instantly recognized as my "Uncle Les" as we always called him. So lovely to see that picture of him as I always remembered him. I came back to England in 1980 and went to theatre school in Guildford and saw him once or twice I think in the year I was there. He was such an integral part of my family, especially being that he was my twin cousins’ God Father.10

On 9 February 1969 Leslie Varley MVO MBE had prayer book inscribed Leslie Varley in memory of his confirmation by the Lord Bishop of London and of his first Communion in the Chapel Royal of St Peter ad Vincula in H.M. Tower of London, on February 9, 1969 and signed Robert London(?) TP Butler Resident Governor, John G Nicholls Chaplain.12 He had another prayerbook inscribed simply Leslie Varley.12

A Tower of London souvenir booklet from about 1976 has a striking picture of him on the front cover and another two of him inside.13

Ady Stimpson said:
Back in the summer of 1972 as a 9 year old schoolboy, I visited the Tower of London during a week long holiday in the Capital with my parents. Having visited the Crown Jewels that particular day, I plucked up the courage and approached what seemed to me at the time to be the tallest most fearsome Yeoman Warden and asked if he would be kind enough to sign my Crown Jewels booklet. My old man was made up on noting that I hadn't simply asked any old Yeoman, but the Chief no less, and MBE too! This evening I came across this booklet in a box in my attic and with the power of the internet, this 54 year old retired company director found a link pertaining to Mr Leslie Varley MVO MBE on your website, along with a photo of the fellow himself.I was saddened although not surprised to learn that Yeoman Varley has since departed for the Tower in the Sky, but thought you might appreciate the photo attached.

Frederick William Shaw was a Railway Fireman in 1888.3

Frederick William Shaw died on 4 July 1888 at the Royal Free Hospital after falling from a tender by coming into contact with overhead wires attached to a signal box. The death certificate records the cause of death as: Died of shock. Compound fracture to legs. Run over by train near Stroud Green Station G.N.R.3 He was probably buried in Ickleford Church Yard.5

Emily Sarah Abbiss lived in a cottage on the green at Ickleford (it wasn't there in 1994).7

Emily Sarah Abbiss died on 9 December 1914 intestate and a widow.8 She was buried at Ickleford Church Yard in an unmarked grave near to the graveyard wall adjacent to the road. There was no visible sign of the grave in Jun 1994.2,7,9

Female, #315, b. circa 1887
Pedigree
Emily Louise Shaw also went by the name of Aunt Um. Pamela Thompson couldn't say 'Emily' as a child and always said 'Aunt Um' instead. No-one else dared call her that.2 She, daughter of Frederick William Shaw and Emily Sarah Abbiss, was born circa 1887 in Islington, London.3

Emily Louise Shaw was an Embroiderer.2 Joan Varley said that she worked for a private firm which had to close down. Queen Mary, who had work done by the firm, got her a job at the Royal School of Needlework so that her expertise would not be wasted. She taught at the Royal School of Needlework. Amongst her pupils were King George V, Queen Mary and the Duke of York who later became King George VI.4,5 It has also been said of her that she was a skilled embroiderer and embroidered cushions for royalty.2

Emily Louise Shaw lived in Hills Road, Cambridge for most of her life6,4 and she went to live in Seven Kings, London after she retired.4

Female, #316, b. circa 1888
Pedigree
Agnes G Shaw, daughter of Frederick William Shaw and Emily Sarah Abbiss, was born circa 1888 in Islington, London.2

Male, #322, b. 26 March 1855, d. 8 January 1936
Pedigree
Frank Gurney Gray, son of George Gray, was born on 26 March 1855 in Luton.4,5,67 And married Elizabeth Lavinia Kingsley, daughter of Abraham Kingsley and Abigail Hanscombe, on 3 June 1886 in the Parish Church, Willian, Hertfordshire. The marriage was solemnised after banns by LW Denman. The groom was a bachelor aged 31, a resident of Willian and the bride was a spinster aged 20, a resident of Pirton. The witnesses were George Kingsley, Mary Ellis and Laurel Aubrey Ellis.1,8,4,5,9 They lived in Northaw, Hertfordshire. He had a house there where Edith Florence Gray was born.10

He joined the Army using the name F Eaves and lying about his age. It's not certain when he joined up but it was possibly either during the gap in the ages of his children or after they were all born. He served in the Boer war.7,11,10,4

At some point he moved his family to 13 Florence Street, Hitchin, Hertfordshire.10 He was a Painter at the time.12 Earlier in his life he had been a Baker and a Coachman.13,14,9

Female, #323, b. 18 December 1865, d. 13 September 1957
Pedigree
Elizabeth Lavinia Kingsley was born on 18 December 1865 at Pirton.3,4,5 She married Frank Gurney Gray, son of George Gray, on 3 June 1886 in the Parish Church, Willian, Hertfordshire. The marriage was solemnised after banns by LW Denman. The groom was a bachelor aged 31, a resident of Willian and the bride was a spinster aged 20, a resident of Pirton. The witnesses were George Kingsley, Mary Ellis and Laurel Aubrey Ellis.1,6,3,4,7

Elizabeth Lavinia Kingsley was renowned for her work as a straw plaiter doing very fine work on elegant hats. All the Hitchin people worked like this at home. Barbara Gray has a little wooden instrument for splitting straw. The straw was held in the mouth and in the hand and the tool was inserted over the straw splitting it into strands.6 She got her son Thomas a job in Nottingham through the Stationmaster at Hitchin whom she knew but everyone thought she was awful to send him away like that.8

Elizabeth Lavinia Kingsley had a wheelchair from circa 1920 She had suffered from puerperal fever and lost a leg as a result. Edith Florence Gray went round vicars, doctors etc. and into London to obtain the eight signatures needed to qualify for an artificial limb. However, Elizabeth Lavinia found it uncomfortable to wear and didn't use it. It was kept hanging on the back of the pantry door at 13 Florence Street, Hitchin, Hertfordshire.6,3

In 1883 she a received a bible inscribed Elizabeth L Kingsley July 20th 1883. A gift from Mrs Mawson. She appears to have given it to her daughter as it is further inscribed Edith Florence Gray from her loving mother. Watch and pray 1895.4