On 1974 Elsie Hodgson was photographed with Eleanor Duncan. About 1910-20. Cyril Robert Hodgson and Queenie Margaret Hodgson also appeared in the photo.3

Catherine Mary Buckley married Andrew Martin Mooney, son of John Mooney and Elizabeth McCabe, on 19 April 1915 at the Church of the Holy Family, Aughrim Street, Dublin. The service was conducted by the Rev J Hoey CC. The witnesses were Thomas Joseph Oates and Margaret Mary Buckley. The event was described in the RIC magazine soon afterwards:

The bride was given away by her uncle D Buckley Esq. Valuation Office Ely Place Dublin. The ceremony was witnessed by many friends of both the bride and bridegroom. The service was fully choral.

Mr Mooney had the distinction of being the youngest officer in the Force who rose from the ranks by competition having secured first place in all his examinations; and his many friends throughout the Force wish both Mrs Mooney and himself many years of happiness in the position he so deservedly earned.1,8,9,10,11,5

They later moved to Charleville Cottage, Ballyorney, Enniskerry, Co Wicklow, which they eventually bought with the balance of the purchase money being paid soon after he died. The house and land passed into her possession and was noted to be a cottage and attached land of about ten acres with a value of at least £1000 rent free.

Cottage is a misnomer being really to distinguish the dwelling from Charleville House that was once the residence of Lord Monck.18,19,20,16,21,22

At some point after 22 April 1964 she wrote a note saying her will was made by James Fagan, Solicitor of Parnell Square, Dublin and that a copy was kept by Uncle Frank in his safe at the Bank Of Ireland, College Green, Dublin.23

In July 1968 Catherine Mooney wrote some notes on the back of a page from a calendar giving details of Paddy Mooney; Maureen Burton (nee Mooney), Tony Burton and their children Tony, John and James; Kerrie Leece, Miriam Garrard and Jane Garrard. She also listed what appears to be Paddy's itinerary to Australia as follows:

In 2003 Andrew James Mooney arranged for a new headstone to be erected over the family grave at Kilmacanogue to record all five people who were buried there together with Frank Mooney who was buried in London. Later, Elizabeth Mary Mooney (Sr Colette) and John Mooney were added. Catherine Mary Mooney is commemorated on the headstone together with Andrew Martin Mooney, Andrew Martin Mooney, Joseph Francis Mooney, May Mooney, Sarah Linnane, Elizabeth Mary Mooney and Jack Mooney.3,28

She and her husband had a housekeeper for many years called Sarah Linnane.29

A few of her possessions have survived. There is a beautiful small Xmas card inscribed from Mother to Katie, Andy and family. It has an embroidered insert and looks handmade.30 There is also a small brown prayerbook given to her in 1921 by her daughter Katie which is inscribed: To my dearest mother with all good wishes for a very happy Xmas. 1921 From Katie.31,32 She had another brown prayerbook too. It is inscribed in the back: If we could only realise that our God has a human heart.16

John Buckley began his police service on 27 November 1880 with the RIC at the age of 18 years and 10 months. His height was recorded as 6 feet and 3/4 inches and his native county as Cork E. District Inspector W Johnston recommended him and his former occupation was given as labourer. His service number was 45912.8 He was in the band in the RIC. He was described as a Constable RIC on his daughter, Catherine's birth certificate on 23 March 1892.9,10

On 10 November 1888 he was allocated to the Reserve at Dublin. He was promoted to Acting Sergeant on 1 November 1895 and to Sergeant almost three years later on 1 January 1898.8,11

John Buckley married Mary Allen, daughter of Peter Allen and Hannah Black, on 19 October 1885 at St Mary's Pro Cathedral, Marlborough Street, Dublin. The marriage was conducted by Chas Maher and the witnesses were William Keegan of Phoenix Park and Briget Kearns of 11 Up Gloster Street.12 His address at the time was 15 Ardmore Avenue, North Circular Road, Dublin, near the Phoenix Park.5,11,13 John lived at 12 Findlater St on 23 March 1892.10

John Buckley died on 16 April 1908. John was described as the "late John Buckley of RIC Depot" in his daughter Catherine's marriage announcement. He was said to have died aged 45. He had played at the Olympia Theatre in Dublin and caught pneumonia because it was so wet.2,14,15,16

Lila said the Buckleys were very musical. On another occasion Lila mentioned that her Grandfather may be related to Donal Buckley who was at one time Governor General of Ireland.17,1

Mary Allen married John Buckley, son of Patrick Buckley and Catherine Tyrell, on 19 October 1885 at St Mary's Pro Cathedral, Marlborough Street, Dublin. The marriage was conducted by Chas Maher and the witnesses were William Keegan of Phoenix Park and Briget Kearns of 11 Up Gloster Street.13 She was staying with Briget Kearns at the time.14

On 25 December 1909 she was given a prayer book by her daughter, Katie. The book is inscribed:

To my dear other
From Katie
with best love
Xmas 09

Lila, her grandaughter, has noted beside the inscription that it refers to her mother and grandmother.15 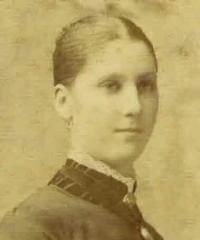 Margaret Buckley
date unknown
Pedigree
Margaret Buckley was born on 29 March 1897 at the Royal Irish Constabulary Depot in the Phoenix Park3 and was baptised a few days later on 2 April 1897 at the Roman Catholic Church, Aughrim Street.3 She was known as Maggie Buckley throughout her life.3

Shenever married and live all her life3 at 40 Rathdown Road the family home3 where she died in 1988.3 Shewas buried in the family plot at Glasnevin Cemetery.3

There is a photo of her which is identified on the back in Catharine Mooney's handwriting. The annotation reads: Mother's sister Margaret of Parkbaun, Gorey, Co Wexford which is where4,5

her grandparents lived and died and where her mother was born.

It is unlikely that she ever lived there for any length of time as she was known, as mentioned above, to have lived all her life 40 Rathdown Road.5,6

Male, #416, b. circa 1886, d. 29 April 1907
Pedigree
Patrick Buckley was born circa 1886.3 Patrick was also known as 'Pa' according to Lila Mooney.3 He was known for doing beautiful fretwork. Lila Mooney gave a fretwork castle he made to Eddie Doyle, May's next-door neighbour around 2002. Eddie is the brother of Tony Doyle who has the coach business in Enniskerry. Eddie and his brother were very good neighbours who looked after May for many years.3

It is believed that a small stamp album inscribed P. Buckley 15 Ardmore St NCR Dublin belonged to him.7 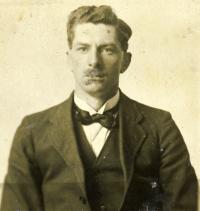 Nicholas Buckley joined the RIC on 25 March 1908. He enlisted from Dublin and was recommended by DI Carey. His height was 5 ft 9 3/4 ins and his police number was 63688. He gave his former occupation as student.4 and was employed in the band.6 On 15 September 1908 Nicholas Buckley was allocated to County Westmeath4 and was re-allocated to the Reserve about eight months later on 11 May 1909. He served throughout the War of Indepence when it was a very dangerous time to be an RIC man.4,7 His service ended on 16 May 1922 when he was disbanded at Depot 26. Nicholas Buckley awarded a CA of £138 6s 4d. His records show that he had family connections in Dublin, Cork and Wexford.4

Nicholas Buckley married Mary Kinsella, daughter of Philip Kinsella and Margaret Parle, on 11 March 1924 at the Church of St Nicholas, Francis Street, Dublin, They were both of full age; he is noted as a bachelor and Mary as a spinster. They both signed their names and the witnesses were John J Buckley and Helen Kinsella.2,8,1,5 He was a Motor Driver5 and lived at 15 Ardmore Avenue, North Circular Road, at the time.5

Mary died on 17 October 1928 at age 408,9,10 and Nicholas eventually married Emily Murphy, daughter of Richard Potter, on 10 January 1930 at the Church of St Paul, Arran Quay, Dublin. He was a widower and she was a widow. The witnesses were John J Buckley and Moira Liddy and the service was conducted by J Fitzgibbon C.C. She had been his housekeeper before they married.8,11,12 Nicholas Buckley lived at 11 St Aiden's Park, Marino, at the time.13 He lived in England at some point.2

Female, #420, b. 13 March 1895
Pedigree
Julia Loftus came from County Mayo.2 She was born on 13 March 1895 at Killeen, Co Mayo.1 Like many Irish people she was not known by her given name being known instead as Babs throughout her life.2,3,4 She married Charles Buckley, son of John Buckley and Mary Allen, on 5 August 1922 at the Roman Catholic Church, Rathmines.2,1

At some time she lived lived at 22 Effra Road, Rathmines.5