On 23 April 1907 Patrick Mooney witnessed the deed of assignment when John Mooney transferred his farm to John Dorgan in exchange for free maintenance for the rest of his life.3,2

On 23 April 1907 William Mooney witnessed the deed of assignment when John Mooney transferred his farm to John Dorgan in exchange for free maintenance for the rest of his life.3,1

Male, #970, d. 14 July 1903
Pedigree
Michael Griffincame from Tuam, Cork, but was a native of Loughrea, County Galway.3,4,5 He married Julia Mooney, daughter of John Mooney and Elizabeth McCabe, on 7 February 1892 at the Church of Our Lady of Refuge, Rathmines, Dublin. The marriage was solemnised according to the Rites and Ceremonies of the Roman Catholic Church by MA Canon Fricker PP. Both Julia and Michael were described as being of full age and they both signed their names. The marriage was witnessed by William Mooney and Alice Cassidy. Julia's address was given as Tuam, Galway and Michael's as 1 St George's Street, Cork. They married only a few years before he died and had no children.2,3,5 Michael died on 14 July 1903 at the North Infirmary, Cork, aged 41.1 At the time of his death he was living at Great George's Street, Cork.1

Michael Griffin was in the Royal Irish Constabulary.2,6,5 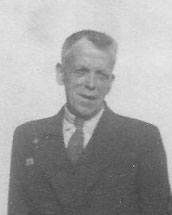 Pawson Hodgson
Pedigree
Pawson sent a postcard to Dear little Elsie. He wrote: don't look for me on here Elsie as I'm not there.4 He was born on 10 June 1883 at Hedon, Yorkshire.5,6 and was baptised in the parish of Hedon in the County of Yorkshire.3

Pawson Hodgson married Eleanor Duncan, daughter of Robert Duncan and Sarah (?), on 27 March 1909 at one 'o'clock at Register Office, 12 Harley Street, Beverley Road, Sculcoates, County of Yorkshire East Riding and Kingston-upon-Hull. The marriage was by certificate and was conducted by John Clapham the registrar. Pawson was described as a Bachelor aged 24 and Eleanor as a spinster aged 19. They both signed their names in the presence of two witnesess, Thomas Hodgson, his brother, and Rose Helen Hodgson his brother's wife. Eleanor was said to be rich, although her descendants didn't agree.7,8,9,10,11,12,13 They both gave 3A Hotham Grove, Hotham Street, Hull, as their address.8,12

He served in the Army Ordnance Corp during the 1914-1918 war as 032338 Private Pawson Hodgson. There is a photo of him in his Army uniform with two fellow soldiers. Pawson is on the left but the other two have not been identified. between 1914 and 1918.14,4

On 6 August 1917 Pawson sent his wife Eleanor a postcard from Rouen, France, saying he would write soon.4

On 10 August 1917 Pawson sent a postcard to his sister Ann from Rome saying A liitle further away and stiil smiling.4

On 16 November 1917 Pawson sent his wife Eleanor a postcard thanking her for the glasses she had sent him.4

Pawson was awarded the British War Medal and the Victory Medal.15

On Saturday 17 May 1919 Pawson sent his wife a postcard from St Germains, France, saying he would arrive home on Monday or Tuesday.4

Pawson went blind. His granddaughter Sheila Adams recalled: I always assumed he was blinded in the first World War but I read my father's war memoirs round about 2013 and he mentioned at one point that 'Dad's sight is worsening.16'

Sheila Hodgson recalled: I have vivid memories of going to my grandparents' house on a Sunday with a bunch of flowers and reciting something from Sunday School.17

Pawson died of broncho pneumonia on 1 February 1960 at age 76 at Western General Hospital, Hull, hospital only five days after his wife died. Two notices appeared in a local paper under Hodgson.Both were in memoriam and one gave details of the funeral.20,21,22,10,18,19

Pawson Hodgson was a Joiner14,23 for most of his life but, he is shown as a Saw Mill labourer on his marriage certificate and as a Pit Prop Carrier on his own and his wife's death certificates.24,18,12

Signed another postcard (presumably sent to Eleanor). It shows a pretty young lady looking pensively into the distance. Pawson wrote: I fancy this is how you will be (waiting).4

Pawson appeared in a school photo circa 1890.4

A number of items of memorabilia exist for for Pawson all kindly provided by Sheila Adams in 2013.4

Pawson was photographed with his workmates in the docks as a young man. A sailing ship is visible in the background.4

On VE Day on 8 May 1945 Pawson appeared in a photograph with Eleanor Duncan, Marie Hodgson and Winnie Hodgson and many others. Pawson is next to the rightmost post. Marie, Eleanor, and Winnie are on the right standing with the dog.4

There is charming photo of Eleanor with a photo of Pawson in his Army uniform inserted behind her.4

There is also a photo of Pawson and Eleanor walking down a street with Sadie Duncan close behind them.4

Another photograph of Pawson and Eleanor.4

Note: Her forename seems to have been difficult to record up to her first marriage appearing in many records with different spellings e.g. Desipha, Josepha, Desepha. Similarly her surname has been recorded in all the usual variations e.g. Hotton, Hotten, Haughton. After her marriage her forename appears consistently as Decephas and when her maiden name is used as Houghton.12,3,4,5,6,7,8,10,9,13,14

Decephas Houghton married John Osborne, son of George Forbes Osbourn and Elizabeth Baldwin, on 11 March 1871 at St Paul's Church, Charlestown, Cornwall, according to the Rites and Ceremonies of the Established Church after Banns by AA Ferris. James Stephens signed as witness and Susan Yates made her mark. They were described as a widower aged 26 and a spinster aged 21.1,6,13

Decephas Osborne married John Hart, son of Richard Hart and Hannah Hall, on 12 April 1885 The marriage was solemnized at Christ Church in the Parish of East Knottingley in the County of York by the vicar, John Crawford according to the rites and ceremonies of the Established Church by Superintendent Registrar's Certificate. He was described as a bachelor aged 30 and she as a widow aged 33. The two witnesses were John Ramskill? and John Robinson Tomlinson.3

Decephas and John lived at Knottingley on 12 April 1885. At the time.3

Decephas Hart was a Housekeeper Domestic on 31 March 1901.15

Note: Sometimes a baptism and a christening took place if the father was away at sea.2

Ethel Alberta Hodgson was Ethel was in service when she was young. She once worked for an Italian family as a nanny/mother's help living-in with the family and looking after their children. During the war she worked in a munitions factory making shells and ammunition. When the war ended she returned to live with the Italian family staying there until she married in 1919.2

Ethel Alberta Hodgson married James Arthur Darwin after 1923 at St Mark's Church, Kingston-upon-Hull, The witnesses were Charles and Gladys Hodgson and the vicar was Frank Sedgewick.2 Before this marriage she lived at 12 Regent Square, Syke Street, Hull.2

Female, #988, b. circa 1900
Pedigree
Gladys Emma Hodgson, daughter of John Richard Albert Hodgson and Emma Boulton, was born circa 1900 in Hedon, Yorkshire.1,2

Female, #990, b. 18 August 1889, d. 26 August 1979
Pedigree
Sarah Linnane was born on 18 August 1889 at Kinvara, County Galway, (her mother's maiden name was probably Moran)2,3 and died on 26 August 1979 at age 90.1 She was buried at St Mochanog Church, Kilmacanogue. She was laid to rest with Andrew Martin and Katie Mooney who she served for many years.1 In 2003 Andrew James Mooney arranged for a new headstone to be erected over the family grave at Kilmacanogue to record all five people who were buried there together with Frank Mooney who was buried in London. Later, Elizabeth Mary Mooney (Sr Colette) and John Mooney were added. Sarah Linnane is commemorated on the headstone together with Andrew Martin Mooney, Catherine Mary Mooney, Andrew Martin Mooney, Joseph Francis Mooney, May Mooney, Elizabeth Mary Mooney and Jack Mooney.2,4

Two prayerbooks exist which used to belong to Sarah. One is inscribed:

A present from a friend to dear Sarah from Mother General, Mercy Convent, Clifden, Co. Galway

The other is inscribed:

Miss Sarah Linnane was received into the Association of the Children of Mary, on Feast of the Immaculate Conception at the Convent of Mercy Clifden

Tucked inside the lining is a newspaper clipping about the death of John Dennehy of Rocky Valley, Kilmacanogue.5

Sarah Linnane was a Housekeeper1 She was housekeeper for many years to Andrew Martin Mooney and Catherine Mary Buckley.6